Now that the 922 film is finished and all our "ducks" are lining up to take the 922 film on tour, I've had a few precious moments to reflect on the past year.  And it has been a ride!

I've done so much research over the past year.  I've read books on education and about how kids learn.  I've read more books about educational reform and the upsurge of charter schools.  I've read articles about "best practices" in the classroom, about failing curriculum, about test data and how to cheat the statistics, and about standardized testing.  I've watched many documentaries ranging in subjects from:
These are all worthy subjects to pursue, I suppose.  Few of the stories on the market today deal with anything positive, however.  So much focus is placed on what's wrong with education instead of seeking out what's right about education and sharing the good news.  And fewer stories make the headlines when schools like The Claymont City School District actually take what is in their control and create an entirely new educational system that actually works.  Not only that,  but they have turned the entire school district into a stellar place to model.  And the best news is, the system is replicable.

It's not brain surgery.  It's not rocket science. 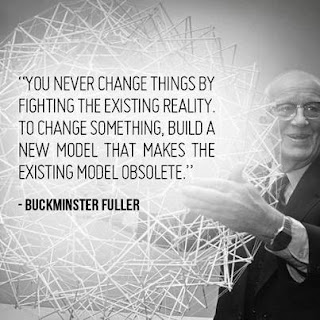 The 922 story exemplifies what Buckminster Fuller believed and what I believe as a person and as a filmmaker.  That might be one of the reasons why the 922 story had our name on it.

Many, many persons and figureheads have expressed what Buckminster Fuller believes.  To name two - Ghandi, for examble, "Be the change you wish to see" -  Chinese Proverb "Better to light a candle than to curse the darkness."  All are worthy to remember.  All are worthy to put into practice.

In my reflective moments, I marvel at what the Claymont community, the Claymont City School District, the leaders, the residents, and the kids have achieved.  They all, collectively, have made such a positive difference in the world.  Now, to let the world know.

My job is to share the story.  So, on tour we go in late February to present the film and the 922 story to over 2,500 educators at the "American Association of Colleges for Teacher Education" (AACTE) National Conference in Orlando Florida.

Be Well and Do Good Things.

922 Movie
I am living such a full life. Wouldn't have it any other way. I am active and interested in interesting people and their situations and circumstances. I will always root for the underdog, the less fortunate. I think humans are such interesting and sometimes such complicated animals. People watching is my favorite past time.